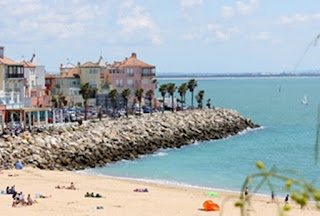 The Costa de la Luz stretches almost 200km from Tarifa to the Portuguese boarder.
The Costa de la Luz (Coast of Light) has long fine sandy beaches backed by pine covered dunes, within this area you will find El Puerto de Santa Maria probably the most famous resort in the area, known by the Spanish nationals for it’s laidback approach but relatively unknown to foreign visitors.
The town of El Puerto de Santa Maria is 10km north east of Cadiz across the bay of Cadiz and is best known for its ferry El Vaporcito which has been in operation for over 100 years carrying passengers to and from Cadiz to El Puerto.
Columbus visited El Puerto in 1480 and received encouragement for his travel plans and he also met Juan de la Cosa who in 1500 issued the first world map. In the nineteenth century the city became the General Headquarters for the French Army during the war of Independence under the reign of Jose Bonaparte (1801-1812) The town is seeped in history, museums and monuments. It is also within easy accessible reach of richly historical cities of Seville and Cádiz.

El Puerto has a famous bull ring which dates back to 1880 with space for 15,000 spectators and bull fighting is still enjoyed during the Feria season, which are during the month of August and during the Feria de la Primavera which is in early May.
This Feria is dedicated to Sherry and 180,0000 half bottles get drunk in 4 days!!!Rebujito being the most popular drink during the feria.
There are several Bodegas in the town centre all of which can be visited by the public.
The most famous being the Osborne and Terry Bodegas who export sherry and brandy worldwide . In the cellars in El Puerto sherry is produced using the traditional method called “solera”. This method produces the pale dry sherries to the sweet Muscatel sherry, Amontillados and the older Olorosos. El Puerto is an excellent place to sample local tapas and seafood, for which it is famous. Food is an important reason why El Puerto de Santa Maria attracts hundreds of tourists.
The Bay of Cadiz is famous for it’s fresh seafood fish and that teamed with the abundance of fresh fruit and vegetables leads to excellent restaurant menus.
Eating seafood in El Puerto is something everyone has to experience, most tourists head for the Rivera del Marisco where you can by seafood in paper cones to take away or eat at the tables. There are a wide variety of eateries all located with walking distance in the town centre. Fortunately El Puerto has managed to escape the mass tourism of the Costa del Sol and remains unspoilt, natural and very picturesque.
During the summer months the town bursts with life, El Puerto is a very lively place with lots of bars and lots going on.Most of the town is on the north bank of the Rio Guadelete, where bars and restaurants line the palm-covered streets. Entertainment is lively in the summer in the town centre and in Vistahermosa everything starts very late and goes on well into the early hours, hence the famous Spanish siesta.

Apartments and accomodation are available on a daily, weekly, and monthly basis. Please click on the following link to see our selection: